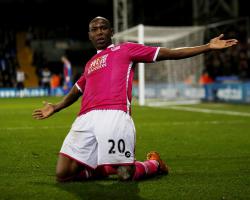 Afobe came through the ranks at Arsenal and scored goals at every level before finding his path to the first team blocked - leading to a number of loan moves away from the Emirates Stadium.

The sixth and final loan move saw him impress at MK Dons and attract the attention of Wolves - who signed him on a permanent deal in January 2015.

Afobe flourished in the Sky Bet Championship and within a year was finally playing top-flight football after Bournemouth shelled out a reported ÃÂ£10million for his services.

Having scored in three of his four appearances for the Cherries, he comes up against Arsenal for the first time on Sunday and Giroud, one of the more experienced men whose form led to Afobe's lack of opportunities with the Gunners, knows he can hurt his former club's title chances as they look to end a run of four league games without a win.

"You need to get more experience and more time on the pitch," Giroud told Arsenal Player.

"It's very important when you are younger to improve yourself

He's showing that he's got the quality to score goals, so it's nice for him.

It helped a lot and in football you have to face difficulties when you're young.

"It helps you to become stronger when you have to face these difficulties in the future, especially at the highest level.

"Since he's joined Bournemouth, he's scored in almost all of the games that he's played so he's a big threat

We need to keep an eye on him, definitely."

Upon completing his move to to the south coast, Gunners boss Arsene Wenger backed Afobe to be a hit at the Vitality Stadium and again spoke warmly of the 22-year-old in the build-up to Sunday's clash.

"He was very young," Wenger replied when asked why it had not worked out for Afobe at Arsenal.

"He had big competition in front of him: he had Robin van Persie, players like that, so I gave him authorisation to go somewhere and play, which he did.

When they do not manage to play for us, if they do it somewhere else we are of course very happy for them.

"I believe Benik has done extremely well, even beyond expectations of many people and that's great, that's down to him and congratulations to him."

The spotlight may be on Afobe on Sunday but Arsenal's own goal-getters will also be under close examination, with Wenger's side having drawn a blank in their last three league outings - the first time that has happened in seven years.

Failure to score for a fourth consecutive fixture will further damage Arsenal's title challenge and leave them in fourth, just five weeks after they beat Bournemouth 2-0 to move to the top of the table.