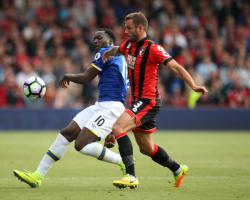 Defender Cook is hoping the Cherries can go on to better last term's tally of five home league wins after helping his side claim a 1-0 victory over Everton on Saturday.

Junior Stanislas' fine 20-yard drive handed Eddie Howe's side their second consecutive 1-0 win at home, as Bournemouth hit back after their 4-0 drubbing at Manchester City and 3-2 EFL Cup loss to Preston.

Howe wants his side to seize on victory over an in-form Everton as a springboard for further top-flight progress, and Cook echoed his manager's aims.

"Last season we didn't actually get that many home wins so we've targeted improving upon that," said Cook.ÃÂ "We need to make this a tough place for teams to come.

"That's two clean sheets back to back at home in the league now, and we really need to build on that.

"We've got to take huge confidence out of this

Those three points are huge.ÃÂ We're looking to improve, get back onto a run and move forward.

"From start to finish it was outstanding, our best performance

A great way to end the week for us."

Everton boss Ronald Koeman insisted in defeat that Bournemouth have too much quality to be embroiled in the relegation battle.

Howe remains on constant alert to downplay any hype around the Cherries however, as the south coast men embark on their second top-flight campaign.

Wednesday's home loss to Preston, hot on the heels of that hammering at Manchester City, left Howe challenging his players to issue a strong response.

Centre-back Cook believes Bournemouth duly produced the right response, then admitted they must retain sharp focus ahead of Saturday's league trip to Watford.

"The buzz has never left, you have bad weeks and bad games," Cook told Bournemouth's official club website.ÃÂ We lost four-nil to Man City but they are arguably the best team in the league.

"Wednesday was a blip, but hopefully we've learned and can all move on together now and have a very good season."

"Leighton Baines has a slight hamstring problem," said Koeman.ÃÂ "It was too risky to play him