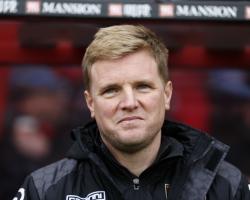 Villa came away from the south coast with a 1-0 victory but they have since won just twice more and sit rock bottom of the standings ahead of the return clash against the Cherries at Villa Park.

They sit 15 points from safety and must at least match Norwich's result - the Canaries play Crystal Palace on Saturday - to keep their Premier League survival hopes alive.

Reflecting on their first meeting in August, Howe admits he did not think Villa would be in danger of going down this season: "No

I think that day they looked a strong team, they had some good players.

"It is difficult first game of the season, you can't read too much into the result and you can't jump to too many conclusions but on that day I thought they were a good outfit.

"It seems a long time ago now, a lot has happened since.

"It was a good performance (for Bournemouth), we created chances but probably didn't work their goalkeeper enough and then we got done with a set play

That day it was 'welcome to the Premier League'."

Howe, though, is not too concerned by Villa's plight, which worsened after they were booed off the field following a 4-0 home defeat to Chelsea last weekend.

He added: "You can focus too much on the opposition

Yes we are aware of them and everything they do but it is about us getting our processes right.

"I think a lot has been made of the crowd and the issues they had last week but football can change quickly."

Bournemouth were also beaten 4-0 at home last weekend, with Manchester City romping to victory, following on from the Cherries' 3-0 loss at Tottenham before the international break.

Former Newcastle striker turned pundit Alan Shearer accused Bournemouth of "being on holiday" but Howe believes his side are still focused on picking up as many points as possible.

For every position higher they move up the league, the financial returns increase significantly and Howe is aware of the implications of finishing the season strongly.

He said: "I am very conscious (of the money difference depending on table position).

"Every position we can move up in the league has huge financial rewards.

"That is the furtherest thing away from my mind when we are preparing to win but it does play a big part when it gets to the end of the season.

"Our target is to try and win every game, it does not change depending on which part of the season we are in.

We need to maximise every game.

"I think it is important we respond with a better performance

I think the last two games we have played top teams and they have given us a good marker on how much we have got to improve, but in saying that our performance levels have not been what they were.

For some reason we have not managed that the last two games."