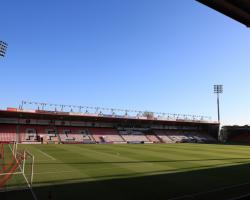 Chief executive Neill Blake issued a statement on Friday afternoon confirming the decision had been taken to start looking for a suitable site following ongoing discussions over plans to develop the 11,464-capacity Vitality Stadium with owners Structadene and Bournemouth Borough Council

Bournemouth have been established at their current site in Kings Park since 1910, but the the Vitality Stadium holds the smallest capacity of any Premier League club

Following dire financial issues which nearly saw the club go out of existence , the Cherries slowly worked their way back up from League Two with three promotions in six seasons to reach the top flight of English football for the first time under manager Eddie Howe in 2015 before then retaining their Premier League status

During those off-field troubles, property investors group Structadene acquired the ground in 2005 for around ÃÂ£3.5million, with a leaseback agreement for the club who would pay around ÃÂ£300,000 a year as part of a long-term 25-year lease, but also hold the option to purchase the stadium at a set price structure within five years

As Bournemouth were unable to complete a buy-back within the allotted time frame, negotiations continued over possible future outcomes

Proposals had been submitted to redevelop the South Stand.

Blake's statement, though, confirmed the issue of being " held to ransom over a price to purchase the existing site" and local planning restrictions meant the board had decided to take the difficult decision to explore options away from their long-established home

Cherries Trust chairman Tony Maycock, who is one of s ome 6,827 season-ticket holders at the Vitality Stadium, believes given the testing circumstances, the club were left with little choice

"The (club) statement confirms a lot of rumours that the current owners of the ground are asking too much for what the ground actually is (worth), but they are in a position that if we want to buy the ground, then that is what they want to sell it for," Maycock told Press Association Sport

"I don't know the exact figure which they are asking

The board have suggested it is too much, then that would imply Structadene have put a very high value on it

"We were hopeful the plans for the new South Stand would come to fruition and they would be able to provide that, but that hasn't happened.

"As the chairman Jeff Mostyn said in the summer, you would not put a conservatory up on someone else's property."

Maycock added: "The club have been trying to get a sensible price for the ground and it appears they have not been able to do that

"If the only way they can realistically improve capacity is to move, as much as we would hate that, we can understand the reasoning behind it."

"The shareholders want to create a legacy of AFC Bournemouth becoming an established Premier League club in a stadium which is befitting of our status, and we believe that building a new stadium on a new site will allow us to deliver that," the statement said.

Howe wants his players to take that momentum into the trip to Burnley.

"The knock-on effect has been good for the players because it has given them a spring in their step this week, but the work has been the same," Howe said at a pre-match press conference on Friday morning before the stadium announcement

"We now prepare for the next game rather than looking back and hopefully create more moments like that."