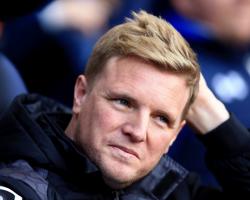 The Cherries were hammered 5-1 at the Etihad Stadium in October, and Howe is hoping his players will show the progress they have made when the sides go head to head again on Saturday at the Vitality Stadium.

"I think naturally we have moved on, hopefully for the better but that will be tested in the performance," said the 38-year-old, whose team head into the weekend in 13th place - 12 points clear of the relegation zone

"That game was a difficult one for us. We conceded very early and when you go away it does make it more difficult.

"The key thing is we learned from that and we have become a better team for the experience.

"I still feel the players are confident despite the Tottenham game (3-0 loss at White Hart Lane in last match before international break), which was a really disappointing performance.

"We still feel as though we need results and points. I don't think we can afford to step off, and we will try and deliver."