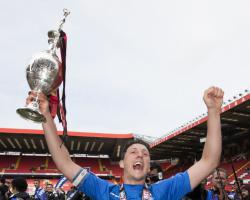 The Cherries host Liverpool on Sunday sitting in 11th place, on 41 points, after winning at bottom club Aston Villa

Barring a miraculous run from one of the relegation battlers coupled with a string of Bournemouth defeats, that should already be more than enough to give Eddie Howe's well-worked squad another crack at the top flight

Defender Elphick, who has just returned from four-and-a-half months out following an ankle injury, believes the way the south-coast club have approached the campaign is testament to a remarkable transition from near liquidation through promotion up from League One

"The manager quickly reminds us of where we have come from and what got us to where we are, that is hard work and togetherness," Elphick said at a press conference broadcast on the club's official website.

"W e have to show plenty of that to win as many games as possible between now and the end of the season, because there are some really tough matches coming up

"We are always looking forward to try to break barriers and set new markers; we have done that by reaching 41 points."

Elphick added: "This is by far the greatest achievement we have had to date, when you look at the teams we have been coming up against, the financial power of some of them that we have beaten, what we have done in the setbacks we have had with so many injuries

"We are 11th at the moment and the aim for us is to finish as hard as possible who knows maybe break into the top of the table."

Elphick is determined to use his return to the side to build towards next season.

Simon Francis has performed well since coming into the heart of Cherries' defence, but filled in at right-back against Villa following injury to Adam Smith.

Elphick said: " I don't feel I have a point to prove

"I started the season on good form, came out of the team due to an injury

It is more about proving a point to myself to get back to the level before I was out, to lay a marker down for next season, to finish the season on a high and then work hard in the summer to come back in good shape."