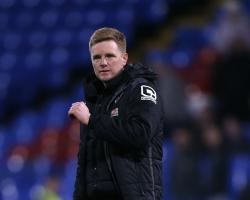 Howe's well-drilled squad have found consistency in recent weeks, returning back-to-back wins from a three-match unbeaten run to pull clear of the scrap to beat the drop

Nevertheless Howe is taking nothing for granted, wary that a seemingly comfortable 11-point cushion can quickly be eroded should one of the teams in the relegation zone hit their own run of form

"Saturday won't guarantee anything but it can help, as all games can, if we can take maximum points from them," Howe said at a press conference

"No one can predict what the final points tally will be

There is still some way to go in the season, teams can go on good runs at this time of year, so we just have to focus on this game and try to win."

Howe hopes that strength of character can continue the club's development, having come up from League One and going on to win the 2014-15 Championship title ahead of Watford

"We are fit, we are talented and have some really good players within the squad, but we do have that attitude and character which has defined the team," he said

"W hen you look at the run we went on from League One to maintain our charge at the end of last season when there were five or six teams who could have ended up winning the title and going up, but it was us

"Now again we've had some challenges this season, we have been given a couple of jabs in the stomach, but we have always managed to respond and keep fighting

"It is our greatest characteristic, but the hard thing is to maintain that, which will always be our challenge."

"They have managed to do really well under Alan Curtis

It hasn't affected their game and that's full credit to their players," Howe said

Bournemouth forward Callum Wilson has stepped up his recovery from a knee injury which has sidelined him since late September, but will not be rushed back into action.

"He is making big strides and growing in conference every day," said Howe.

"We hope to see him before the season is out, but I don't put too much pressure on him at this stage..

he could possibly return next month."