Bournemouth striker Callum Wilson only has eyes for the Cherries 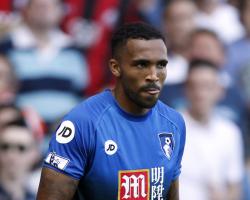 Wilson's performance in Saturday's 2-2 Premier League draw at Watford led some to suggest he should be in Gareth Southgate's thinking for England.

But like his manager, striker Wilson's priority is Bournemouth.

"I'm just taking it game by game and trying to give 100 per cent every game and put in performances for the team," he said on talkSPORT.co.uk.

"The icing on the cake are the goals and unfortunately my goal didn't count towards a win, but we'll take the point.

"I'll just focus on club football and let the international thing take care of itself."

The England squad will be named for the World Cup qualifiers with Malta and Slovenia on Sunday evening.

Wilson's first-half strike - his second of the season - was cancelled out by Watford captain Troy Deeney, who netted his 99th goal for the club.

"Hopefully I can get 100 and keep going," Deeney told watfordfc.com.

I just want to play, improve and keep my place in the team."

The Hornets twice fought back from behind to draw, the second coming when substitute Isaac Success cancelled out Josh King's goal.

Success was a club record ÃÂ£12.5million signing from Granada but is yet to start after five substitute appearances.

He's asking the question that he should be starting.

"To get his first goal, with a great header, he looked a real threat."

The Hornets were pleased with the draw, but Deeney wants more when they resume following the international break at Middlesbrough.

"We're happy to come away with the point, but more importantly it was the manner of the performance," Deeney added.

"We proved before that we can come back from adversity

"The question is how we're going to apply ourselves week-in, week-out.

"We've got to make sure our performance levels are bang at it week-in, week-out."

Bournemouth felt it was a missed opportunity.

"We let ourselves down

We came here to get three points and we think we should've got that," King said on the club's official website.

"We shouldn't give away stupid free-kicks and that cost us the game.

"We're disappointed we didn't leave with three points, but always happy to get a goal.

"I thought we won it then, but that's football and the game's not over before the final whistle."