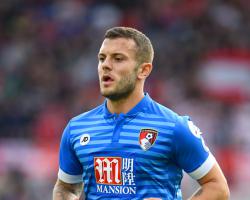 England international Wilshere swapped north London for the south coast on a season-long loan deal in a bid to get regular playing time again following a frustrating run of injury setbacks with the Gunners.

The 24-year-old, however, is not eligible for selection on Sunday because of Premier League rules

Howe believes Wilshere can be proud of the impact he has made so far with the Cherries, playing in all but one of the 12 league games

"He will be a big miss for us

I feel Jack has got better each week," Howe said at a press conference

"When I look back at the last game against Stoke, he was excellent for us and was the key link between midfield and attack

"Also his defensive displays for me have been superb and are undervalued, how good he is without the ball, how clever he is with the positions he takes up to protect our midfield

"He is going to be a big miss in both disciplines, with and without the ball this week."

Bournemouth recorded a 1-0 win at Stoke last weekend, which leaves them 10th and looking up the table again

Howe said: "We have always been a positive group, win lose or draw and go into the next game with enthusiasm and a high work ethic, with a lot of quality in training

"We need a little bit of luck, will need all of our players to play at their maximum level and then I think we have a chance to win."

Cherries g oalkeeper Artur Boruc faces a late fitness test on his back problem, while winger Jordon Ibe is expected to be available following illness

Ibe was involved in a robbery from his car at the start of November near Surrey Quays Underground in south-east London, with reports suggesting thieves had threatened the 20-year-old with a knife before making off with a ÃÂ£25,000 Rolex watch

Howe confirmed the player, signed from Liverpool in the summer for ÃÂ£15million, was unharmed as everyone looked to move on from a "really unsavoury unfortunate incident."

The Bournemouth manager said: " Jordon is fine, he is okay , the incident occurred in early November so as far as we were concerned it was dealt with and put to bed, obviously when it comes out in the press, then it resurfaces again

"It is a difficult one because once the players are out of your control, how do you protect them? You can advise them on places to go and places not to go

"I think they are going to be easy targets because of their cars and their obvious wealth, it is easy to spot

"Security measures here (at the club) are very strong, we protect them here and give them any advice we can, but it is really up to the individual concerned to keep themselves safe."