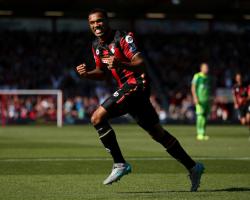 The 24-year-old missed the majority of Bournemouth's first season in the Premier League after he ruptured the anterior cruciate ligament in his right knee in September, but returned to the side for the final games of the 2015-16 season

Wilson joined Bournemouth in 2014, scoring twice on his debut and becoming the club's top goalscorer as they were promoted into the Premier League for the first time in their history

"Callum has constantly improved during his time here and only his injury stopped him from having a big impact in the Premier League last year.

"Now back to full fitness, we're excited to see Callum continue to improve over the next four years."

Speaking to the Bournemouth Echo, manager Eddie Howe said about the signing: ""There was a lot of competition for Lys' services and it was quite a protracted transfer so we are very pleased to have got it over the line

"Lys is a really talented young centre-forward who we believe will be a real asset for us, both in the short and long term.

Myself, Jason and our team of scouts have all watched him a lot and we all liked what we saw.

"He is an under-20 international and recently played in the Toulon Tournament where he performed very well for France.

"Last season was his breakthrough season when he did very well for them and showed he is a player of rich potential.

"He had a good grounding at Le Havre

They have produced some good players and Lys has all the makings of being another one.

He is a good size, he is very strong, very quick and knows where the goal is

He is very much in the AFC Bournemouth mould.

"We are really excited to have signed him and are very much looking forward to working with him."