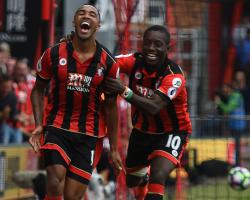 "It was a big moment for him," said Howe

"You could see that with the celebration with all his team-mates.

"It's been a long road for Callum

I think it's everything for him when that's what you do, you score goals

You don't feel like you are considered back to being fit until you are scoring goals again.

So it was a very good day for him individually."

Bournemouth had dominated possession, although West Brom had created the better chances, when Wilshere was called upon after 63 minutes.

Artur Boruc had made fine saves from Saido Berahino, twice, and Gareth McAuley when Howe sent on his shock deadline-day loan signing from Arsenal.

Wilshere has not completed 90 minutes for the Gunners in almost two years due to a string of injuries.

But his presence gave his tiring team-mates a lift and with 11 minutes to go Adam Smith's cross was flicked in by Wilson to give Bournemouth their first win of the season.

"Jack gave us a foothold, which we had lost, and I thought he was terrific," added Howe.

We felt half an hour was a good call for him today.

"What we don't want to do is push him too early

The key objective is we want him fit and available all season, and if we do that then you could see today what a player we have on our hands."

West Brom is not exactly a happy ship at the moment, although a takeover by a Chinese consortium is set to be completed next week.

Fans are disgruntled and manager Tony Pulis this week voiced his frustration at their transfer dealings, but after the match he launched a passionate defence of his spell at the club.

That was my remit.

"The Chinese are coming next week, the club is being taken over and we'll see what they want to do

But the remit was to keep the club in the Premier League and in profit, and that's what we've done."