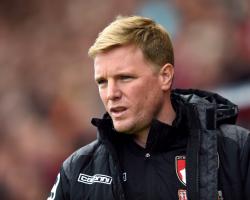 The Cherries are all but safe on 41 points, some 11 clear of the Premier League's bottom three heading into their final four matches of what has been a remarkable debut top-flight campaign.

Howe was impressed by the way his side pulled together to secure a run of three successive victories in March to climb away from the relegation scrap, but then left less than impressed after losing three from the next four, beaten heavily by both Tottenham and Manchester City.

The Bournemouth boss is expecting a response for the visit of a Chelsea team very much in transition, having recovered from their poor start to move up into mid-table.

"Psychologically, it has been difficult with the outside world telling everybody that we are safe and I think that has had an impact on just a small percentage of how they (the players) are viewing the game ," said Howe, whose team lost 2-1 at home to Liverpool last weekend

"We were playing games like our lives depended on it all through the season, then suddenly I think it is very natural that when people say you have achieved your objective, the psychology is that you drop your level, a very small percentage.

"We have to make sure we find that again for this game."

Howe added at a press conference, broadcast on the club's official website: "We still don't consider ourselves safe, I think I have been saying that the whole time

"While it is mathematically possible that we can be caught, we have to have our wits about us and make sure we prepare for every game like it is a cup final

We are trying to do that."

Bournemouth recorded a memorable 1-0 win at Stamford Bridge in December, and another victory would move them level on points with the Blues, who are currently in 10th place.

"We haven't talked about a top-10 finish, just about this game and making sure we give our best and every effort we have to try to get a result," he said

"Manchester City were excellent against us, Liverpool have still got world-class players and they made the difference on the day, so the top teams can turn it on."

Howe, though, will take things slowly with the 24-year-old.

"I was pleased with his little cameo last week against Liverpool, he did very well

I don't think it is any coincidence that it coincided with our best spell of the game and the goal," he said

"Callum is getting closer to a start

From there, we can get his minutes up."