Cook says Bournemouth still have plenty to play for 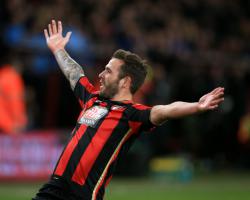 The Cherries picked up a third straight win thanks to Cook's late header which secured a 3-2 victory over Swansea and lifted them 13 points clear of the relegation zone.

Their tally of 38 points should be enough to keep them up, but Cook wants Bournemouth to finish their maiden top-flight season in the top half.

"We'd like to think we are safe. We want to get to 40 points as soon as possible but I think we are more or less there," the defender said on Sky Sports' Goals on Sunday.

"We want to finish as high up the league as possible. That's now our target, to get into the top half. We are two points off the top half so that will be our aim, and I am sure we can do it."

Goals from Max Gradel and Josh King twice put Bournemouth ahead, only for Modou Barrow and Gylfi Sigurdsson to peg them back

But Swansea could not recover a third time after defender Cook nodded home Matt Ritchie's cross with 12 minutes remaining.

The Swans were looking to take another step towards securing their own survival, but with eight points between them and the drop zone they cannot relax just yet.

Head coach Francesco Guidolin will be back at the helm against Aston Villa next weekend after missing the last three matches due to a lung infection.

Striker Marvin Emnes is determined to get the points on the board as quickly as possible.

"We must now focus on next week and prepare well for Aston Villa," he told the club website

"We need the three points to start climbing the table, and we want to secure victory in front of our fans.

"We know that the situation is in our hands, and I believe that if we keep playing like we have been playing in recent weeks, we won't have any problems."