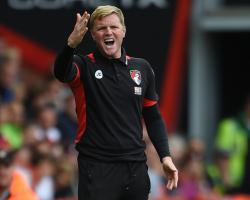 The Spaniard was confirmed as the new City boss in February but did not start in the role until Manuel Pellegrini left at the end of last season.

City have won their opening four league games of the season, including beating local rivals Manchester United 2-1 at Old Trafford, and the Cherries travel to the Eithad Stadium to face the Premier League leaders this weekend.

Speaking about the appointment of Guardiola, Howe said: "I think they're an outstanding team

Individually I think they've got outstanding players and they've got a manager who, in my opinion, is right at the very top.

"I think the biggest compliment I can give him is the impact he's had on that team so early - you can see when they play he's stamped his authority on that team.

"When I watch them play, I enjoy it - and it's rare for me to say that when I watch an opponent play

Loan signing Jack Wilshere came on as a substitute in the Cherries' 1-0 win against West Brom last weekend, but Howe admits he is not going to rush the Arsenal midfielder straight into a full game.

The 24-year-old has suffered from a number of injuries since signing for Arsenal from the youth team in 2008, including breaking his fibula in pre-season training in 2015, and Howe believes playing for Bournemouth is going to help improve his fitness levels with more game time.

He said: "We'd like to see him in the team as quickly as possible.

We have to think of that

We want him to play a lot of games for us so we'll put him in when we think it's right.

I thought he had a big impact when he came on at a time in the game when the game was in the balance.

It was a big contributing factor to us winning the game."