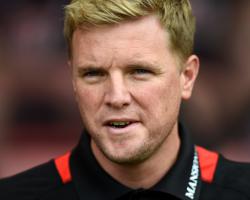 Howe was one of the leading candidates to replace Roy Hodgson when he stepped down as England boss in the summer and is now being linked with the post again following Sam Allardyce's shock departure.

The 38-year-old has previously said he would relish the chance to coach England one day but insisted on Thursday morning that he has not heard from the Football Association, while reaffirming his commitment to Bournemouth.

He told a press conference: " They haven't come to me and my message is very similar

I am committed here, I love the job

"The England job is the ultimate job, I have signed players very recently and I am committed to them