Eddie Howe committed to Bournemouth amid link to Arsenal 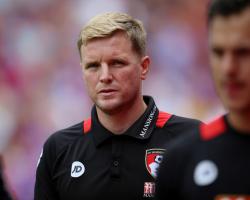 Howe has been reported as a target for the Gunners should Arsene Wenger leave his post at the end of the season, but Bournemouth chairman Jeff Mostyn spoke out on Thursday and told the Daily Star that Howe was "a Bournemouth boy through and through"

Howe returned to Bournemouth for his second spell as manager in October 2012 after leaving the club in January 2011 to become the Burnley boss and before the Cherries' home game against West Brom on Saturday the 38-year-old said he will be staying with the south coast club.

He said: "I'd rather (speculation about leaving) than people talking about the other alternative a manager has (the sack) but really this season is so new, w e haven't won a game yet, we are three games in

My only focus can be on Bournemouth, every single minute of every single day, because if it is not then the team will suffer.

"I reiterate my commitment to Bournemouth again

I am very happy here.

I love the town, the club, the supporters and I want to see that association continue for as long as possible

"(The comments) are meaningless

I don't need to hear it

I want to win games here, we want to climb the league

"My only aim is success for Bournemouth."

"I think there are challenges we face," he said.

"It has been a tough start

I think we were always aware that with the games we have had that they were difficult games.

"I think we would have loved to have held on and got our first win against Crystal Palace (when they were denied by an injury-time equaliser) but it wasn't to be.

"We have to dust ourselves down and go again

Every week in this league we are going to face tough teams, I think this season will be tougher for us but I think we are better prepared for that.

"We have a stronger squad, we are prepared internally and I think we are looking for one result to kick-start our season."