Eddie Howe could make one more addition to his Bournemouth squad 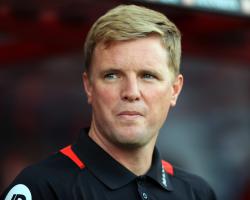 The manager has also insisted that unless they recruit that "younger talent", no alternatives will arrive because he believes his squad is "99 per cent there".

Bournemouth visit West Ham on Sunday after losing their opening match of the Premier League season 3-1 at home to Manchester United.

New signings Jordon Ibe and Lewis Cook were among those to feature, and Howe told the club's official website: "We don't want to add too many more to the squad, there's potentially one position we'll look at - a younger talent.

"Unless we did that deal we will stay as we are

I'm satisfied that we're 99 per cent of the way there.

"It's a stronger squad than last year, we have more numbers and a very good work ethic

When you recruit you have to make sure you don't lose your identity and the pleasing thing for me is that everyone has had a great mentality towards their training.

"I've gone on record to say it's difficult to attract Premier League players in their prime, we've gone down a younger route of recruitment, but we're delighted with the players we've brought in, they've got great character, attitude and will be very good players for us."

Bournemouth earned their first ever Premier League victory last season at West Ham, almost a year to the day from Sunday's fixture.

Their defeat by United was convincing, but they made a reasonable start and the 38-year-old Howe said: "The lads came in with renewed vigour after the game.

"It was an even game, the squad's looking okay and we're looking forward to a really exciting game on Sunday."