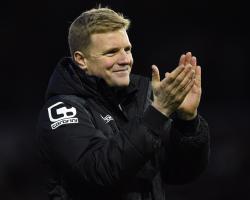 The arrival of Matt Ritchie and Marc Pugh on the hour and Joshua King's switch through the middle spared Bournemouth's blushes at Fratton Park.

Pompey boss Paul Cook revealed "I just shut my eyes" when Bournemouth sent on the cavalry - an admission to back up Howe's calmness over the calculated gamble of wholesale changes from last week's 1-1 Premier League draw at Sunderland.

"It's always a risk, you don't know what the outcome's going to be," said Howe when asked if his selection was a gamble.

"But I believe that the players, when you look at them individually, are all very good players.

"They've all done it at a very good level, so I had no hesitation in making the changes.

"We absolutely trust all our players and need to give them chances.

"And we need them to be fit, this was a great opportunity to get them games so they are still ready to go in the Premier League.

"It was a very tough game, we expected it, we knew it was going to come.

"Credit to Portsmouth they were very good, they passed the ball, they pressed us

We didn't get into any rhythm, and it took us really to get the two subs on to get control of the game.

"But once we did we were very good until the end of the game."

Match-winner Pugh was not even two years old the last time Bournemouth reached the FA Cup fifth round, in 1989.

The Cherries were relegated to League Two when Portsmouth won the FA Cup in 2008, but met here at Fratton Park having firmly traded places.

Boss Cook's composed Portsmouth side totally belied the 56-place gap in the league pyramid in a dominant first-half against the Premier League visitors.

Roberts' strike was just reward for that effort, sending Portsmouth in 1-0 to the good at the break.

As the hosts started to tire however, so Bournemouth boss Howe sent pacy pair Ritchie and Pugh into action - with clinical consequences.

Norway forward King flicked a header home before Pugh bustled the winner over the line from a corner.

Proud Portsmouth boss Cook accepted defeat without issue, only hoping that his side had enhanced their reputation.

"We wanted to make sure that by the end of the day people spoke well about us," said Cook.

"The reality was it was a good game, we came off second-best and we wish Bournemouth well in the next round.

"Bournemouth are a quality team, they had strength on the bench and that told.

"The stadium was rocking, it was disappointing not to win and for that we apologise, but I think the supporters still went home with smiles on their faces."

As Bournemouth continue to focus on their Premier League survival bid, Howe insisted a cup run can only boost their league concerns.

"It's definitely from my point of view a welcome distraction," said Howe.

"We want to go as far as we can and who knows how far it can take you.

"These rounds are difficult but if you can get beyond them you never know how it can transform your season.

"We were concerned at half-time

We wanted a better performance in the second half.

"We picked a team to win this game, but the key thing is the players had the character to respond and get us into the next round.

"We had to dig in, but we came through that.

"When you have a bench like that you know you've got the ability to change the game and thankfully that's what happened."