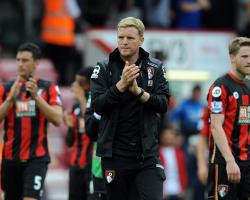 Howe's team travel to Norwich on Saturday for their first Premier League fixture since the conclusion of the summer transfer window, towards the end of which they attempted to sign Norwich's Lewis Grabban.

Norwich rejected bids from Bournemouth for the striker, but Grabban later walked out of the team hotel before the Capital One Cup victory over Rotherham and was consequently suspended for a breach of discipline.

The striker remained at Norwich, and Bournemouth instead recruited Glenn Murray from Crystal Palace

Despite the potential disruption caused to one of their rivals, however, and the fact that Saturday's fixture comes so soon after that particular episode, Howe sees no reason why there should be any antipathy between the two clubs.

"I don't see why we should, to be honest," said Howe when asked if his team can expect a negative reception at Carrow Road.

"Certainly not from our side, and of course we hope from their side

We're competitors, we're two teams that were in the same league last year and fought a really good battle to try and get out of the Championship, and both sides were successful

And now we're going against each other in the Premier League it should be a good match.

"They've made a decent start [to the season]

It's always tough when you come up to a new league, to know how you're going to update to the challenges that you're faced with

But I think they proved, going to Sunderland and winning, and getting a good draw against Stoke, that they're going to be competitive this year, I've got no doubt about that.

"They've got a good squad of players and they're very well managed, that's obvious, so we're expecting a tough challenge.

"I don't think it's right to speculate or to talk about other people's players.

"This game gives us a good marker, to see how much we've improved during the summer to now."