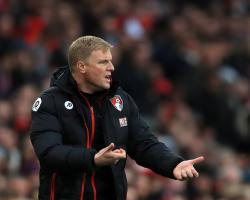 The Cherries host local rivals Southampton on Sunday buoyed by the midweek victory over Leicester, their third win in five Premier League games.

Howe had freshened up his starting XI against the defending champions.

While there will be plenty of deals to be done during January, Howe is, for now, not planning to rush into any panic buys

"I don't think it will be a huge window for us this season, but you never know how things can change in football, with injuries," the Bournemouth boss said

"At the moment I am very happy with the squad how it is, providing we don't have any major setbacks in the next few weeks, I don't think it will be a very busy month for us.

"There are a couple of things we would look to do, but they would not be major moves in the market.

"We don't expect major changes, if any they would be subtle ones to make sure we are well prepared.

"If we did receive any bids, then we would look at it, but as far as I am concerned, we would not want to be selling any player that is a key part of our long-term plans.

"We don't sell anyone we don't want to, providing the players are happy here, then we will keep the squad intact."

Howe added: " I do have options and players who are knocking on the door with their performances saying they want to start, so I have a couple of decisions to make this week, which is nice

"It is a pleasing thing because when you give players an opportunity, you want them to take it, you don't want the opposite.

"It is healthy for the squad that everyone has an opportunity if they do well in training and impress that they will get a chance to play."

Bournemouth will go above the Saints if they beat their south-coast rivals at the Vitality Stadium for a second season running.

Howe, who spent most of his playing career with the Cherries, believes there is more at stake than just getting one over their neighbours again.

"Last season was a terrific atmosphere, the scenes were really enjoyable after the home win and the away game was not such a nice feeling, so it is a big game for the supporters and an important one," h e said

"But I think we are aware every game is important in the Premier League, it does not matter who you play."