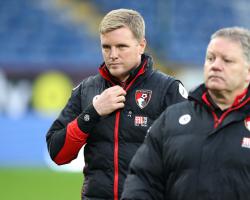 The Cherries twice came from two goals behind against Liverpool last week to grab a stirring 4-3 win and were battling from the back foot again at Burnley on Saturday.

After 17 minutes at Turf Moor Howe's men were 2-0 behind and with quarter-of-an-hour left it was 3-1 to Burnley.

But Charlie Daniels reduced the deficit to one with a 90th-minute rocket and Bournemouth missed a couple of chances to steal an unlikely point before the final whistle.

While that speaks well of Bournemouth's fitness levels and spirit, it is not a reputation Howe is keen to encourage.

"We don't want become a team that plays well when chasing the game," he said.

"That's the easier side

We want to be the team that dominates games from start to finish, that's leading the game and seeing it out.

"There's still growth to come from this team, we're not the finished article and I think this proves that."

Despite the late rally, Bournemouth defender Nathan Ake accepts the game was decided in the opening skirmishes.

The team had worked all week on dealing with Burnley's direct aerial approach but they became the fifth side this season to come undone at Turf Moor.

"It's a really difficult place to come because they put constant pressure on you, a lot of long balls and they fight for every ball and every second ball," he told Press Association Sport.

"We knew this game was going to be like this but we still got a bit surprised in the first 20-25 minutes.

"Of course we never want to be 2-0 down...after that we started to play our own game but before that we were pressurised by their style."

Burnley may have benefited from long balls at times but showed no shortage of skill in the final third.

When they went down two years ago they found the net 28 times in the entire season and scored three only once.

"Last time we didn't score as many as we should, but we're scoring from everywhere at the minute," said Boyd.

"It was a fantastic strike from Jeff - and we've got Wardy scoring too - so it's important that everyone chips in, not just the strikers.

"I'm off the mark now and hopefully can add more.

"It's right in the corner and a lovely feeling to get my first of the season."