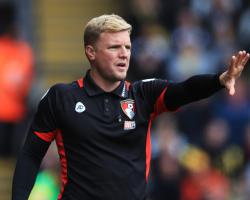 The Hornets twice came from behind at Vicarage Road and England hopeful Jack Wilshere spurned a glorious opportunity to win it for Bournemouth.

Howe on Thursday played down suggestions he would be Sam Allardyce's successor as England boss and repeated his focus was on Bournemouth after the Premier League clash.

"It's been the easiest thing in the world for me," Howe said.

"Football and the day-to-day workings of the job are what I love to do.

"So, no disrespect, I don't take a blind bit of notice of anything that is written or said because I have to focus on the football and the players I have here."

Wilshere missed out on Allardyce's one and only England squad and did little to enhance his prospects of a return for the World Cup qualifiers with Malta and Slovakia.

The on-loan Arsenal midfielder twice hit the outside of the post, the second from six yards out with the goal gaping after Adam Smith's cross from the right.

He has not completed 90 minutes in a Premier League game for 20 games and more than two years.

But Howe preferred to accentuate the positives as Wilshere's hunt for a first Premier League goal since May 2015 continued.

"The pleasing thing for us is that Jack's getting in goalscoring positions," Howe added.

"With his class and his quality there's no doubt he'll be scoring goals for this team in the future.

He's grown into the game.

"I felt that was the same today

And I think he's going to be a massive player for us."

Callum Wilson's first-half strike was cancelled out by Troy Deeney.

Josh King restored the lead moments after coming off the substitutes' bench, but the Hornets levelled for a second time through Isaac Success three minutes later.

If this were an audition for England then Wilson and Deeney stood out, although Holland-born Morocco winger Nordin Amrabat outshone them both

It was not one of Howe's team's better performances.

Howe believes Wilson was close to an England call-up at the start of last season before a serious knee injury.

Asked whether Wilson should be in Gareth Southgate's squad, which is named on Sunday evening, Howe said: "I think he has the ability to get there.

"From my perspective at the moment it's still making sure he's okay fitness-wise and injury-wise and continues his good form, because he's building some momentum now."

Watford head coach Walter Mazzarri was pleased with the character shown by his side on his 55th birthday, particularly in the second half.

He said: "I was happy with my team

They had the character of never giving up and this for me is important.

"(At half-time) I told them that we played very well in the first half, but they have to avoid doing silly mistakes we sometimes do, giving the ball very easily to our rivals.

"I also told them that given the opposition we have to press higher.

"My players listened to me

They came out in the second half doing what I told them."