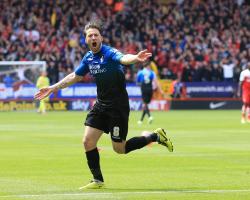 The midfielder, so crucial to Bournemouth winning the 2015 Championship title that he was named the fans' Player of the Year, is yet to play this season after suffering injuries to his hip and groin.

His condition also meant he missed out on pre-season, but Howe has named him in his 25-man Premier League squad and is optimistic about his return now that he is again training.

"There are no guarantees until (Arter) is back playing, but we are hopeful that he is now through the worst of his problems and is on the road to recovery," Howe said.

"But it will take him a while

Those were his first steps and that is why we included him in our 25-man squad because we believe he can be fit.

"He hasn't really done anything up to this point so, when you consider a lot of our players has a six-week pre-season, Harry is now starting afresh.

"I would like to think he will be fit enough to play within a month, but I don't want to put too much more pressure on him that that.