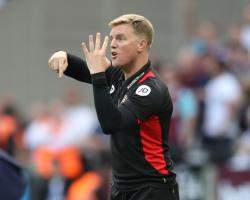 The Cherries now face Watford at Vicarage Road looking for a second win in a row after beating Everton 1-0, and Howe is keen to put talk of England behind him after playing down the link on Thursday

For me the reason I wanted to be a football manager was to coach, to build a team, try to win games, have that competition against other teams and inspire players to reach levels they never knew they could hit

"All of this side of it gets in the way

My main focus is always the football.

"When you are in the Premier League the games come so quickly, I haven't given the England job a thought.

"I'm not letting it get to me at all

I am watching Watford this week in any spare moment I get, I am focusing on our training

"This was an unwelcome thing, it was not something I wanted to see at all.

"I want England to do well, I want to see consistency in what they want to do and I thought it was sad for football to see the events develop this week.

"It surprised me in the summer (that he was linked).

"Considering I was one year into the Premier League that surprised me, but now I am accustomed to it

Bournemouth and Watford have identical records in the Premier League so far this season and Howe believes it will be a tough game as the Hornets will be on a high from their 3-1 win at home to Manchester United.

He said: "I think it will be a tough game.

"I think Watford are a very good team at home, they have had some tough fixtures and they managed to beat Manchester United in their last home game so I think they are strong and they have some very good front players.

"The strikers have a physical threat as well as an aerial threat and they have the ability to do a lot.

"I think they have changed their system, they have gone back to three at the back which suits the strikers."