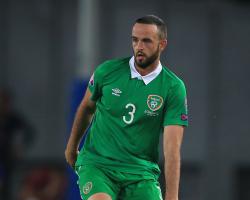 The central defender joined the club from Stoke for ÃÂ£2million earlier this week and is in contention to make his debut on Sunday at West Ham.

His arrival comes after the summer departure of former captain and defender Tommy Elphick to Aston Villa.

Howe - once a promising central defender the 28-year-old Wilson recalls playing alongside in his youth - believes he has almost finished his recruitment.

He told Bournemouth's official website of his latest arrival: "Marc adds versatility, experience, a voice, he's a leader as well, in training he's very competitive, which is good to see

He'll fit very well into the group we have.

"I'm pleased to get Marc in

He's got the experience that we're looking for in that position

It is a very difficult position to recruit in; a lot of clubs have found that this season, that lack of numbers of quality centre-backs available.

It's been really interesting to see his career and how well he's done at Stoke; this is a different challenge for him but I look forward to managing him and making him a better player."

It has been suggested they will feel particular pressure to impress at the start of a new era, but Howe dismissed the notion that Bournemouth could therefore benefit.

"There's pressure on us," said the Bournemouth manager, who considers Andy Carroll a particular danger

"I always believe there's pressure on us; from our own supporters, from ourselves

We want to perform and give our best in the game.

"There's going to be a lot of hype surrounding the game, we're aware of that, the fact it's the first game in the stadium, but none of that matters to us

It's all about making sure we apply ourselves in the right way.

They've added some good players to their team

The obvious threat with Andy Carroll is the aerial ability

Anyone who plays West Ham when he's in the team; that's a threat we're going to have to counteract.

"They've got obvious talents - (Dmitri) Payet, you could go on - it's all about us and making sure we're right first."