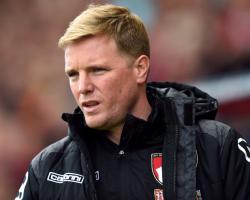 Fans have held banners calling for the Spaniard to go and backed Leighton Baines after the left-back was forced to apologise for saying Everton lacked 'chemistry'.

More protests are planned for Saturday's home game against Bournemouth, when Howe will face the manager he has been linked with replacing.

Asked if he would be interested in succeeding Martinez should he leave Everton, Howe told reporters at his Friday morning press conference: "I don't think I have to reaffirm my commitment here every week, which seems to be a regular pattern

I love it here and I'm committed to the job.

It's a very difficult profession and you're judged constantly every week on your results, on a lot of aspects of your job

It's very tough at this level."

Meanwhile, Howe is keen to protect Harry Arter's long-term future as the midfielder continues to battle a persistent Achilles problem

"It's been difficult for him because he's the type of character that wants to play, as they all do, every week," said Howe

"He missed pre-season, the first part and the tail-end of the season and in between he did really well

We will wait and see what happens."

Arter is unlikely to be involved at Goodison Park and Howe remains uncertain how long full-back Adam Smith will continue to be sidelined by his groin injury.

However, Max Gradel may be back in the Bournemouth squad that travels to Merseyside

"Adam Smith has seen a specialist and we're waiting for some definitive feedback on him," said Howe

"Max is improving slightly, he took a knock but we hope he'll be okay

Again we'll take our time on him but we're hopeful he'll get fit."