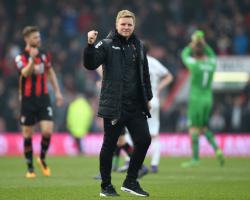 Steve Cook's late header sealed a 3-2 win over Swansea to move the Cherries on to 38 points, 13 clear of the relegation zone with eight games remaining

The fans were singing 'we are staying up' at the end of Bournemouth's third win in a row, but Dean Court boss Howe is not counting his chickens

"The official line is that nothing is decided today," he said

"What good would saying 'we are safe' do? We have a number of games still to play against some very good teams

We can't relax at all, if we do we'll get punished

"But we are certainly in a very good position and I'm very pleased with the players and how they have conducted themselves this season."

Goals from Max Gradel and Josh King twice put Bournemouth ahead, only for Modou Barrow and Gylfi Sigurdsson to peg them back.

But Swansea could not recover a third time after defender Cook nodded home Matt Ritchie's cross with 12 minutes remaining.

The Swans were looking to take another step towards securing their own survival, but with eight points between them and the drop zone a few more nervy weeks are on the cards.

Alan Curtis once again stood in for head coach Francesco Guidolin, who is still recovering from a lung infection but is expected back for next weekend's visit of Aston Villa

"It was two teams who wanted to play on the floor and I didn't think anyone was in the ascendancy, it changed back and forth and at 2-2 I thought possibly we were the team most likely to win, so it's frustrating.

"We've slipped up a bit today, if we had got a result it would have made it much easier, but now we have to work doubly hard until the end of the season

"I would think Bournemouth are safe

We've just made Aston Villa next week a must, must-win game."