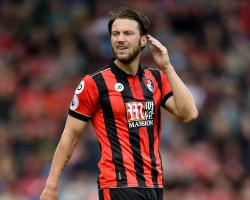 Arter has recently brushed off suggestions he would aim to declare for England given he has yet to feature for Ireland in a competitive fixture despite winning three caps.

The Bournemouth midfielder left Dean Court on crutches after suffering a knee problem on Saturday, but that was thought to be a precaution.

"I think the players' performance will dictate what happens on that side," said Howe of Arter's international chances.

"They've got to get their Bournemouth form right first and the rest will follow.

"When you talk about Harry the last few weeks he's been absolutely terrific for us.

"So I'm sure if he continues that form he'll get rewarded.

"The way we play, it's not easy, it's the hardest way to play I believe.

"So there's a lot of responsibility on their shoulders, but they take that very well."

Cherries boss Howe was refusing to get carried away by either the victory or the performance however, despite Bournemouth bossing possession in total vindication of his eye-catching gameplan.

"He hit the woodwork last week from a free-kick and he did that again today.

"He took his goals well and his overall performance was good.

"I'm really pleased with how he's developing as a footballer."

Hull only had Ryan Mason's heavily deflected goal to show for their efforts, leaving boss Mike Phelan to issue a heavy warning on his side's Premier League future.

Robert Snodgrass' reckless challenge on Wilson gifted Bournemouth the penalty that put the hosts 3-1 to the good at the break and killed the contest.

Phelan though refused to criticise the former Norwich forward despite that almost inexplicable tackle.

"If you look at every goal there's a problem there to pick up on," said Phelan.

"One incident doesn't really change the way the game panned out.

"I'm not going to look at that for a moment

We have to do better as a group.

"I put myself in that, simply because I picked the team, the tactics and probably we didn't execute it as well as we should have done.

Nobody wants the results we've been having over the past few games but that's the Premier League.

"You go into games positive and within seconds it can change.

"We'll have to look at the situation, take stock, learn from that and move on quickly."