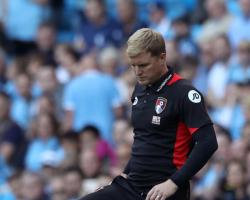 Simon Makienok scored a hat-trick for the Sky Bet Championship side as they secured a 3-2 win at the Vitality Stadium after extra time.

The Denmark international grabbed his first goal for Preston on 11 minutes but Bournemouth rallied in the second half.

Lewis Grabban scored his first goal since returning to the Cherries in January as he converted a penalty following a Ben Pringle handball before Dan Gosling added a second to set Howe's side on an apparent course to the fourth round.

But Makienok struck again, levelling with a header to take the tie into extra time, where the Palermo loanee then tucked away the winner with nine minutes left.

Howe made 11 changes to his team with the likes of Jack Wilshere, Callum Wilson, Jordan Ibe and Simon Francis nowhere to be seen in the Bournemouth squad - but it is a sign of the changing times at the club that the starting XI named here still cost in excess of ÃÂ£40million.

But Howe, who saw his side jeered off by a small number of fans following the defeat, was left deflated by the performance of those who came into his team.

"I don't give these opportunities lightly," he said

It disappointed me immensely

We have let them (the fans) down.

"It was very disappointing from start to finish

It was unlike us

I felt we were lethargic

We didn't play with our usual energy and enthusiasm

We got what we deserved."

Preston boss Simon Grayson made 10 changes after a weekend thumping by Brentford.

And he reserved special praise for Makienok, who has been limited to four substitute appearances in the league this season.

"He shown what he is capable of doing again," Grayson said of the former Charlton striker.

Any striker who scores goals it will give them a boost for their confidence.

"He is more than just a target man

You saw him even at the end running the channels

He has fantastic hold-up play, a good touch and brings people in and allows us to play a different way.

He has just been waiting for an opportunity and Simon has shown what he is capable of doing."