Eddie Howe wants Bournemouth to show they are better than before 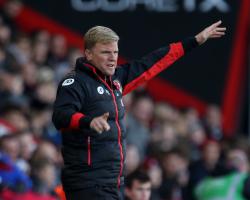 The Cherries went down 2-0 at Middlesbrough and were then beaten 2-1 at home by struggling Sunderland, who recorded a first Premier League win despite having Steven Pienaar sent off during the second half.

After heading to Stoke, Bournemouth are then set for matches against title challengers Arsenal and Liverpool.

Howe, though, remains confident his squad have enough about them to soon put right what went so wrong in their past two performances as they look to move back into the top half of the table.

"Our focus during the international breaks is to turn into a better team than when we left, so hopefully we can show that," Howe said at a press conference

"We created a number of good opportunities against both Middlesbrough and Sunderland, b ut those statistics will change if we continue to do the right things

"It has been very difficult - people's perception is that the result is the be-all and end-all, but there were periods in those games which were hugely frustrating because we deserved more

We understand what kind of job we are in

It feels like a long two weeks for us, so we are chomping at the bit to play."

Howe added: " Stoke is a tough place to go at any time of year, but I think we can go there with confidence

"I want to see 100 per cent commitment, as you do in every game, and that passion you need to win."

With right-back Adam Smith serving a suspension, Howe must shuffle his rearguard around for the first time in the Premier League.

That could present an opportunity to on-loan Chelsea defender Nathan Ake.

Howe rejected suggestions the 21-year-old could be set for an early return to Stamford Bridge in January following a lack of game time.

Ake has so far played twice in the Premier League, his last appearance being as a late substitute on August 27, and twice in the EFL Cup

"We have had no discussions with Chelsea," the Bournemouth manager said

"We have had meetings with them regarding how he has progressed, but there's been no mention of January or anything like that

"Obviously it is up to me to make the best decisions for Bournemouth.

"But we love Nathe

We think he is a really talented player with a bright future ahead of him."