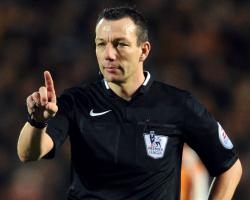 The Premier League confirmed it had been given an update from the Professional Game Match Officials Limited governing body that concussion protocols are now to be followed, meaning Friend would not be able to take charge of the match between Southampton and Sunderland on March 5 as planned.

Friend was the fourth official at the Vitality Stadium, but was taken to hospital after banging his head on the dugout during the first half.

Koeman said: "I was on the bench and he came to us and he fell against the dugout, with his nose, and then fell to the ground.

"I don't know his situation now, but he for maybe five seconds he was out of everything."

Friend was treated on the side of the pitch before being taken to hospital, with non-league referee Dean Treleaven - a spectator in the crowd - pressed into service as a stand-in fourth official to help referee Mike Dean and his assistants for the second half.

Should Friend be given a clean bill of health following the implementation of the concussion protocols, then the Leicestershire-based referee could return for the Premier League matches over the weekend of March 12/13.