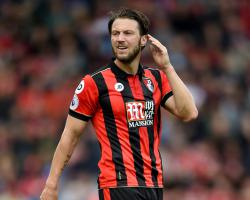 Sissoko struck Arter in the second half at the Vitality Stadium but, after consulting his linesman, referee Craig Pawson decided against any further punishment.

The Frenchman could, however, still face a three-match suspension for violent conduct if the FA choose to take retrospective action.

Arter reacted angrily immediately after the incident as both sets of players clashed on the pitch but later the 26-year-old was more sympathetic.

"After the game he apologised

I'm not one to hold grudges

"It looks like he elbowed me but he apologised and said it was an accident so that's good to me.

"At times in the heat of the battle you react differently and now I feel happy with his apology and if he didn't mean it hopefully he doesn't get banned."

Arter also said Pawson told him he had not seen the incident which would pave the way for the FA to take retrospective action.

"I thought it was going to be a red card at the time," Arter added.

From my point of view I am happy with his apology."

Any ban for Sissoko would come as another blow to Tottenham, who have had to do without several key players already this season.

The stalemate means Mauricio Pochettino's men missed the chance to go top of the Premier League and it was their third consecutive draw since beating Manchester City so impressively three weeks ago.

"I always say when you cannot win, you must not lose, but it's three draws in a row now and we needed to score," Spurs captain Hugo Lloris said.

"Perhaps we need to be more aggressive in the last 30 yards, in our runs, in our passes

Look, it's football and there are ups and downs.

"We had good control of the game apart from the first 10 or 15 minutes when they had a lot of pressure and had a good chance.

"It's not enough because we have ambition, so we're not happy with a point."