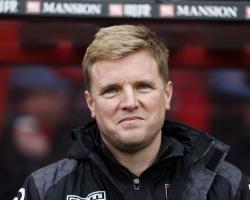 The Cherries lost 3-1 to Stoke at the Vitality Stadium on Saturday and Howe believes the team's spirits dropped after Giannelli Imbula opened the scoring after only nine minutes with an instinctive volley.

He said: "It is a strange one because the first 10 minutes it seemed to me that we were excellent, camped in their first half and we were all set to watch a really good display.

"It was similar to the Arsenal display really, where a goal comes out of nothing - a wonder-strike from their perspective and then we seemed to lose our way a little bit and our confidence levels.

"We realise we need to be at our best to win games at this level but for that first half we weren't.

"We were negative with what we were trying to do, our movements with the ball were not quite right and I can only, at this moment, put it down to confidence levels.

"We have been so good, our run has been so strong but football is a strange game.

"It only takes a moment of a game to lose your way and you have to find yourself again.

"For us it is back to the training pitch, back to the hard work and I think there has to be an understanding."

However, he still believes they can turn around the defeats to survive relegation.

Howe said: "I think any defeat can be a positive in time because eventually it makes you re-evaluate your aims and ideas and it makes you rethink what you are trying to do, so that is what we need to do at this moment.

"We are in a key run of games, an important run for us.

"We need to make sure we don't look at the end of the season and have any regrets at this stage.

"It is very much a case of looking at the next challenge, but know we have to do better."

His goal ended the Potters' three-match Premier League losing streak and manager Mark Hughes was pleased with the 23-year-old's performance.

He said: "It was a great opening goal from Imbula who I think for the whole game showed the calmness and understanding that was required, he showed signs of a good player who was always in space and always had time for the pass.

"We feel we have got (a top quality player) in the building now.

Two quickfire goals in the second half and that took the game away from them.

"All in all, apart from the injuries we seem to be picking up at the moment, it was a really positive game."

Goals from Ibrahim Afellay and Joselu finished off the Cherries, who scored a consolation goal through Matt Ritchie.