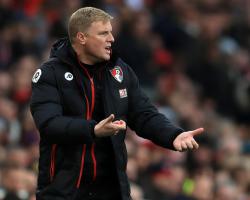 The Cherries lost both games against the Reds - 2-1 at home and a 1-0 defeat at Anfield - last season and have not even drawn with them since they were Bournemouth and Boscombe Athletic in 1968.

He said: "Our games with Liverpool have been tight, even back to our Championship days when we played them in the cups, but the quality they have in the front areas is among the best in the Premier League

And when the chances come at the other end, like they did at Arsenal..

w e need to find a way to be a bit more clinical."

Howe, who was appointed Bournemouth manager for a second time in 2012, reached a milestone in last weekend's 3-1 defeat at the Emirates, where he oversaw his 300th game as Cherries boss.

He believes he has much more to achieve in the future.

Bournemouth currently sit 12th in the Premier League and have won four matches, including a 1-0 victory over Liverpool's local rivals Everton.

Howe said: "To take the club into uncharted territory, to places we've never been before, would be my aim in the short term

"It would be nice to keep going, keep breaking records and breaking new ground.

"That's the beauty of this club

Every time you do beat a top team, or you do well in the Premier League, you're setting new milestones for the club.

"I'm not going to talk about unrealistic things, or things we can't achieve

I want the players to do the talking.

"I don't believe anything is impossible

I think we've proved that already - so who knows?"

Howe announced this week that midfielder Andrew Surman has suffered a setback in his recovery.

The 30-year-old has not featured since October and is unlikely to do so until the new year.

Howe said: "Surman has had a slight setback

He felt some discomfort in his hamstring so he won't be available.

"We felt (Artur) Boruc could've been available last week but he missed out - he's improving.

We have a couple of selection issues but with the strength of the squad there are opportunities there."