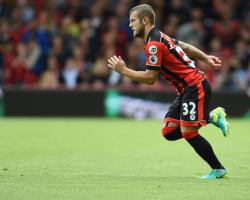 The England midfielder made his first Cherries appearance since his shock deadline-day loan switch from Arsenal as a substitute in Saturday's 1-0 win over West Brom.

Wilshere, who has been dogged by injuries over the last two years, came on with half an hour remaining and fitted in seamlessly, first in an attacking midfield role and then out on the right.

And his bright cameo helped Bournemouth to a first win of the season thanks to Callum Wilson's 79th-minute strike.

"It was a good win for us," Wilshere told the club website

"I thought we did very well and deserved the three points

It was great at the end to be on the pitch celebrating and applauding the fans - that's what it is all about.

"Hopefully if we can keep performing like that and getting results then they will keep coming.

It's similar to the way I am used to playing at Arsenal - I can fit into this team, I think

"I came on in the number 10 position and then moved to the right for the team.

"I can do that role and I can also play deeper

I am comfortable in all of those positions

Different games bring different problems, so we will see.

"The biggest aim for me, and I am sure everyone is aware of it, is to get as many games as possible

That was the idea coming here.

So hopefully I can play as many games as possible, prove everyone wrong and re-kick my career."

Defeat was harsh on West Brom who, after a quiet first half, had created the better chances until Wilson struck.

Baggies winger Matty Phillips told the club website: "I think it was a game where whoever got the first goal would go on to clinch it, so i t was really disappointing to concede late on

"It was frustrating because I thought we created some very good opportunities in the second half and then they went and scored when we were on top."