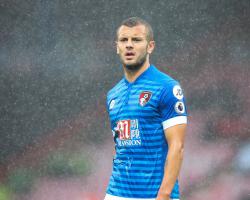 The Cherries sealed a deal for Wilshere on the last day of the transfer window after the 24-year-old, following two injury-ravaged seasons, struggled to cement his place at the heart of Arsenal's side.

Wilshere is expected to make his debut for the club on Saturday against West Brom at Dean Court and Howe believes he will make a huge difference to the squad.

The Bournemouth manager said: "I think it is a brave decision for his career but hopefully a good one

ÃÂ Hopefully when he looks back in a year's time, he will see it as a turning point in his career for the better."

Howe added: "If you had said to me (a few years ago) that we would have the opportunity to sign someone like Jack I would have said it is not possible

"It is a moment we look on and think 'wow, that is a big moment for the football club'

ÃÂ It is a different path for us, there are risks attached to that but there are also huge benefits if it goes well."

Italian giants Roma and AC Milan were among the 22 clubs linked with signing the midfielder on loan but Howe believes Wilshere's determination to stay in the Premier League was what drew him to the club.

He said: "I think the key thing for Jack is he wants to stay in the Premier League, I think that was important for us (getting the deal)

"(Arsenal) were happy to go with Jack's decision but I think it had to be a good fit.

"Ultimately Arsenal want us to get the best out of Jack and it will benefit everybody if his loan spell is successful, so the environment had to be right and all parties will benefit."

Speaking about how the players have reacted to the signing of the England midfielder, Howe added: "He has settled in to the dynamics and the changing room very well

I think he has been very bright in training, as you would expect.

"It has given other players a lift

"The level of training has gone up because he is here but ultimately our players are going to enjoy playing with him."