Jack Wilshere turns out in Bournemouth shirt for the first time 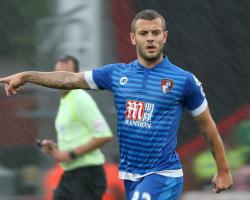 The 24-year-old completed a surprise switch to the Cherries just ahead of the closure of the transfer window late on Wednesday evening, having seen his first-team opportunities limited with the Gunners

Wilshere, not selected for Sam Allardyce's first England squad, was named in Bournemouth's starting XI for Warren Cummings' testimonial at the Vitality Stadium

The midfielder was soon in the thick of the action, breaking down the right before crossing to Lewis Grabban, who shot wide, and then saw a curling shot saved by Milan goalkeeper Gabriel Ferreira

Cherries boss Eddie Howe made a number of changes for the second half, including replacing Wilshere

Milan went ahead on 64 minutes through Suso, who had a spell at Liverpool earlier in his career, but Bournemouth were soon level through Lys Mousset, who joined the English side from Le Havre in the summer