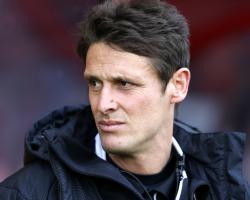 Summer signings Brad Smith, Emerson Hyndman and Lys Mousset could be handed debuts and the likes of Adam Federici, Max Gradel and Benik Afobe will be hoping for starts, but whatever XI takes to the field, Tindall is confident of getting a result

"It's going to be a really tough game away at Morecambe but we're prepared, we're focused and we're looking forward to going out there and putting on a performance

"We've got a fantastic group of players, they know exactly what's expected of them and they work extremely hard on a day-to-day basis.

"Whatever players are selected to play, they're going out there representing the club and they need to deliver a performance to keep the shirt."

Tindall was involved as a player when Bournemouth were promoted from the Football League's bottom tier in 2003, and expects surprise Sky Bet League Two leaders Morecambe to be fired up for the challenge of facing a side from the top flight

He added: "Of course it's a different challenge, but not so long ago this club was where Morecambe are now and when you're in the lower leagues and you draw a team from a higher division you're so looking forward to it

"The pressure is off you, everyone's expecting you to get beat and that's the confidence that they're going to be going out there and playing with."