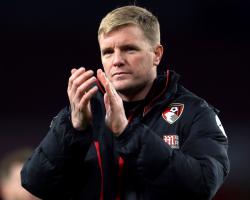 The 20-year-old midfielder joined the Cherries in July, completing a ÃÂ£15million transfer from Liverpool where he had been since 2012, and has since featured 12 times for his new club.

Howe said: "He's only 20 years old and given time he will make a real difference.

"There is so much more to come, the potential of the player is limitless and he's technically and athletically excellent.

"Every player is different, people have to get used to our way of working

But we've seen a lot of good things from him, maybe that hasn't happened consistently, but for a young player that's the challenge - to change those moments of brilliance into consistent match-winning efforts."

The Cherries face a Liverpool side who are unbeaten in 15 games, with their last defeat coming at Burnley in August.

Bournemouth lost both Premier League games against Liverpool last season - 2-1 at home and a 1-0 defeat at Anfield - but Howe is confident his players are ready for the game.

"It's a great challenge," he added.

"They're a very good team, but why can't we win? We're at home, we're competitive here and we'll give it a very good go.

"There's no fear in our mind, the journey this club has been on to now be preparing to face Liverpool, what we'd have done to do that a few years ago, we'll take this kind of game and look to do ourselves proud.

They have a clear identity and I think the game will be a similar one to Arsenal given the quality we're up against."