Koeman full of admiration for Bournemouth's style of play 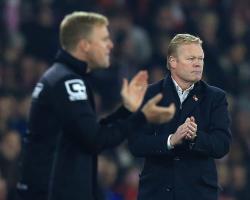 Koeman's Saints will face the Cherries at the Vitality Stadium in league action on Tuesday night for the first time since a 3-1 win in League One in March 2011.

The Dutchman praised Bournemouth counterpart Howe for instilling a deep-seated philosophy of attacking, possession football with the promoted club.

The Southampton boss believes Howe's men will avoid the drop this term, and wants both south-coast sides to thrive in the top flight.

"From the outside, I'm always looking to managers about the philosophy of the team, and he has created a way to play attractive football, with good, technical players," Koeman said of Howe

"And that's what I like. It's brave and it's also in my opinion the most difficult way.

"It's easier to give the goalkeeper the ball, him come out of his box and play a long ball, and you fight for the second one.

"Some teams in the Premier League play like this, but I like a different way of football.

"He's a very good manager. He's been very successful, of course. He's now a long time the manager over there.

"He's doing a fantastic job. If they stay in the Premier League that will be a great effort for them and for the manager.

"They try to play football, be creative and play offensively, and that's what I like.

"I hope they can stay in the Premier League and I think they can - it will be nice to continue with derbies against them.

"They are doing well, they are strong, very competitive at the moment.

"They are still in with good possibility of staying in the Premier League and that would be great. It makes it more special for us if you play derbies against them.

"It's fantastic for the south coast to have two teams in the Premier League."