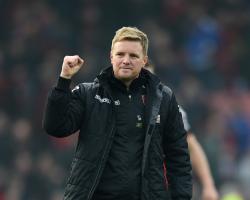 United have made several big signings over the summer, with Paul Pogba, Zlatan Ibrahimovic, Henrikh Mkhitaryan and Eric Bailly all arriving at Old Trafford.

He said: "I think it is really important we are not in awe (of big name players), we are not too stand-offish.

"We have to respect our opponent but once we go into the match, they are any other player and you treat them as such.

"We have to make sure that we try and keep (Ibrahimovic) or any number of their players quiet.

"I think you could pick any of the United team as a threat, even their full-backs, so we are well aware of the test we have and hopefully we will give as good as we get.

"I think that experience of playing the superstar names and the big clubs...you naturally become a bit harder and you know what is coming and I think that will stand us in good stead - but we have to take it up a level.

"I think (Ibrahimovic) will probably play

He is a great talent, it is great to see him here - but from our perspective we don't want to be in awe of him, we want to keep him quiet."

Bournemouth beat the Red Devils 2-1 at home last season, which the Cherries boss has previously described as "one of the highlights of the season"

He said: "(That result) did everything for the players

The Chelsea result was huge, we defended really well, it was a solid performance for us and then to follow that up and beat United, it lifted everybody

"The belief was there that we could achieve our goal and stay in the league.

"I think sometimes it does take a result like that to stimulate the players, hopefully we won't have to wait too long for that feeling this season.

"I don't take these games for granted

It is our second season in the Premier League, we are privileged to host everyone - but it is going to be a special one."

Howe believes the Cherries respond well to the tag of underdogs, adding: " It is always nice to prove people wrong

I think it suits us for where we are, I have no problem with it

"I think this whole club has had to prove people wrong for a long, long time.

"Everybody individually has been written off at one moment or another

"I think with the size of the stadium and the name that we have, I think we will be classed as underdogs for a long period of time until maybe something changes with the ground and we become a little bit bigger in scale."