Marc Pugh strike sends Leicester back to the drawing board 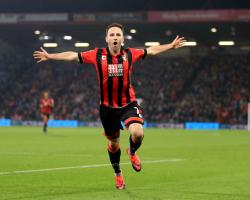 The Cherries moved up to eighth in the Premier League after inflicting Leicester's eighth defeat in 16 matches of their title defence.

Eddie Howe's men repeatedly carved a chasm between Riyad Mahrez and Christian Fuchs on Leicester's left, and that proved sufficient for victory.

The Bournemouth boss grabbed full dividend from the calculated gamble to deploy full-back Adam Smith in midfield, Nathan Ake at centre back and Jack Wilshere in a deeper role.

Leicester were left to rue another miserable performance, and a chance to build momentum well and truly wasted.

Saturday's 4-2 win over Pep Guardiola's Manchester City was meant to light up Leicester's season, but has instead proved merely another false start.

Benik Afobe met Smith's cutback on the run, drawing a smart save from Ron-Robert Zieler at the near post.

The Leicester keeper could only parry however, teeing up a tough chance for Pugh.

The grafting midfielder produced a fine technical finish however, holding his shape well in staying over the top of the ball when volleying home.

Just when the home faithful feared the Cherries would turn around empty-handed, Pugh struck.

Harry Arter's fury at receiving no free-kick when running 40 yards with Robert Huth climbing all over his back fired up Bournemouth as much as the crowd.

Leicester had no answers to Howe's men before the break, with Vardy shut down by Steve Cook when fighting to round Artur Boruc.

Islam Slimani swung his left boot at fresh air from Marc Albrighton's teasing cross, but Leicester could point to little else of note in the first half.

Smith fired over from a promising station in that well-worn right channel after the interval.

Bournemouth impressed in the early stages, but ran out of steam on the hour.

A clutch of miscued passes, including two from goalkeeper Boruc, handed Leicester a territorial foothold.

Callum Wilson replaced Afobe in a bid to add impetus to the hosts, but Leicester still pressed their claims.

Huth headed wide from a corner when unmarked at the far post, then Shinji Okazaki proved equally wayward with a 20-yard dip.

Ranieri pitched Leonardo Ulloa into a three-man attack at the expense of withdrawing defender Huth in the closing stages, so desperate was the Italian to snatch any kind of result.

Cook blocked first from Mahrez then too from Okazaki, the second intervention proving crucial with the Leicester striker through on goal.

Bournemouth's defending became ever more frantic as the match inched to a close, with Boruc saving from Ulloa at close range.

Both teams reaped their just rewards however, with Howe's Bournemouth again proving their Premier League mettle.