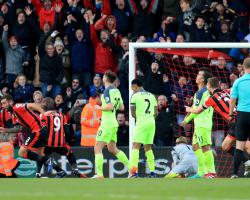 Seemingly coasting to a win which would have taken them to within a point of leaders Chelsea, the Reds came undone as Bournemouth substitute Ryan Fraser led the comeback charge as the hosts sealed a memorable 4-3 victory from 3-1 down.

Goals from Sadio Mane and Divock Origi had Liverpool ahead at the break and the points still seemed to be heading back to Anfield when Emre Can's strike restored their two-goal advantage following Callum Wilson's penalty.

But Fraser, who had come off the bench to win the spot-kick, then buried his maiden Premier League goal before crossing for Simon Cook to superbly equalise, with Ake bundling home a last-gasp winner as Loris Karius failed to hold another Cook effort.

Liverpool were straight on the front foot and Origi should have opened the scoring with 10 minutes on the clock but the forward failed to make meaningful contact with Nathaniel Clyne's low cross.

And the opening goal came shortly afterwards as Can lofted a perfectly-weighted pass to Mane who got the wrong side of Ake before poking past the onrushing Artur Boruc.

The Poland goalkeeper was back in the Cherries side having missed the previous two games through injury, but he was at fault as Origi doubled Liverpool''s lead less than three minutes later.

Mane robbed Harry Arter of possession and passed to Jordan Henderson, whose raking ball set Origi away and the Belgian took the ball past Boruc as he sprinted from his line, finishing well from a tight angle.

There were a flurry of yellow cards at the start of the second half, with Henderson booked for a foul on Junior Stanislas which forced the midfielder off.

His replacement, Fraser, was immediately involved as he was brought down in the box by James Milner, with Wilson tucking away his second penalty in as many games.

Liverpool turned up the heat and soon re-established their two-goal dominance as Mane broke into the box with ease and squared for Can to finish superbly.

Karius just managed to turn a stinging Fraser drive behind before the goal decision system spared the blushes of his counterpart Boruc.

Milner did well to win a corner and swung it in himself with Boruc catching and almost carrying the ball over his line, with the goal-line technology showing it was centimetres from giving Liverpool an unassailable lead.

Instead, Eddie Howe's men turned the screw and it was Fraser who gobbled up the chance to thrash the hosts back into the contest as he latched onto a loose ball in the box.

And they were not finished there as Cook controlled and finished off a Fraser cross with aplomb to leave Klopp fuming on the touchline.

Another Bournemouth substitute, Benik Afobe, came close to completing a remarkable comeback but his effort was kept out by a sprawling Karius.

But a famous win would be secured in the dying embers as Cook's low drive from the edge of the box was spilled by Karius into the path of Ake, who bundled home.