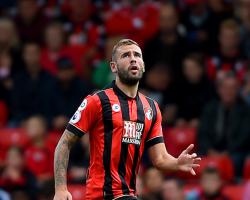 Howe hailed centre-back Cook for leading Bournemouth's recovery in atoning for his mistake that had gifted Hull Ryan Mason's goal.

Cook gifted Hull possession then diverted Mason's speculative drive past the wrong-footed Artur Boruc to let the visitors level at 1-1 at Dean Court.

"I always say when we make mistakes we make them together," said Howe of Cook's error.

"And when we make mistakes playing out from the back or building from deep positions I take responsibility because that's how I ask them to play.

"So I never look to crucify an individual for making a mistake trying to do the right thing.

"Steve's been excellent for us this season, he's really grown in his maturity and the consistency of his performances.

"And that was another sign of his maturity, the fact that he responded to the mistake by doing something positive and not letting it affect him.

"The way we hit back after conceding that goal was the most pleasing thing from today.

"Of course we scored a number of goals and played very well but the ability to bounce back from that setback was crucial.

"We had dominated the game and to find ourselves at 1-1 was very, very cruel.

"But the players didn't let that disappointment linger, and went and scored two more goals before half-time.

"That two-goal cushion was very important.

"And the next one was key, either to bring them back into the game or end it, and thankfully we got it."

Junior Stanislas bagged a brace with Charlie Daniels, Callum Wilson and Dan Gosling all adding to Cook's header as Bournemouth ran riot on the south coast.

Stanislas stepped up to bury a penalty at the end of the first-half and hand the hosts a 3-1 lead at the break, but Howe revealed the 26-year-old was not the designated spot-kick taker.

"We always like the players to take responsibility; we had a designated penalty taker," said Howe.

"For whatever reason he didn't want to take it, so it changed in motion, so that's something obviously we'll look at.

"I'm very pleased with the fact we were clinical in front of goal.

"We've won three in a row at home now and that's really pleasing because last season we struggled to win here.

"If you don't win at home it means you put pressure on yourselves when you go away, and thankfully our away form last year was really strong.

"And you know your home form is your bread and butter.

"Our goal at the moment is to improve on last season, that's the target we've set.

"We don't want to get carried away at the moment.

So an improvement on last year will do us."

Hull boss Mike Phelan admitted the hefty defeat is a wake-up call that his side must heed or face the consequences of a relegation dogfight.

Phelan challenged Hull to handle the hammering as a reality-check after he had won August's manager of the month award and since claimed the full-time manager's job.

"Now we realise what it needs and the momentous hard work we have to do to stay at this level.

"We have to react to it

It's something that we're all responsible for.

"A reaction is exactly what you want.

"The players and staff are hugely disappointed, because we weren't the team that I thought we were.

"So it's a lesson we have to learn and learn quickly."