Steve Cook whips up Bournemouth as Hull are soundly beaten 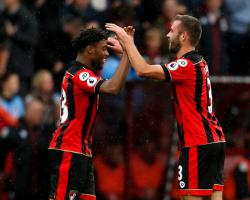 When the Cherries stalwart nodded home Stanislas' free-kick, he relished his quick-fire redemption with a conciliatory wave to the home support.

That this was Phelan's first game as full-time manager after a lengthy caretaker stint made it all the worse.

The 26-year-old picked the right day to conduct the tempo, with Ireland boss Martin O'Neill no doubt an impressed spectator.

Stanislas curled a free-kick off a post and Daniels buried the follow-up to hand the hosts the ideal start.

Half-chances unconverted could have cost the Cherries however, with Wilson striking the bar after diverting Ibe's low cut-back.

Stanislas saw a low drive deflected wide and Ibe blasted over from 25 yards after being left in acres of space once too often.

Just when Bournemouth looked to grapple total control, though, one mistake proved costly

Cook conceded possession far too cheaply with a stray pass, and Hull pounced.

Another Cook blunder gifted the visitors the goal too, the defender lazily redirecting Mason's long-range shot past the blameless Boruc.

The distraught Cook punched the turf then buried his face in his shirt - but somehow found a rapid redemption.

Stanislas stalked the ball from his team-mates once the cast-iron penalty was awarded, and duly converted the spot-kick, firing straight down the middle.

But after that the visitors were unable to generate any tangible threat.

Stanislas massaged the scoreline with his second and Bournemouth's fourth goal, tapping in at the far post after an accurate low cross from Adam Smith.

Wilson headed in the fifth, before Gosling curled home the sixth, heaping the indignity on hapless Hull.