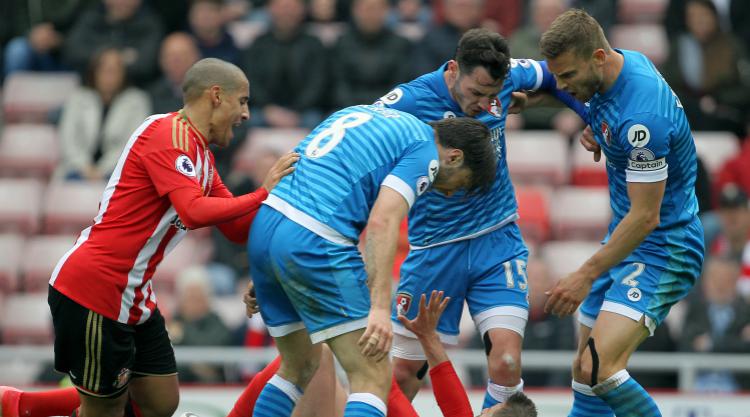 Sunderland and Bournemouth have been charged by the Football Association with failing to control their players during Saturday's Premier League clash at the Stadium of Light.

The allegation surrounds an incident which happened 76 minutes into the Cherries' 1-0 win on Wearside following Fabio Borini's challenge on Lewis Cook.

An FA statement said: "Both Sunderland and Bournemouth have been charged following their game on Saturday.

"It is alleged that in or around the 76th minute of the fixture, the clubs failed to ensure that their players conducted themselves in an orderly fashion. They have until 6pm on 5 May 2017 to respond to the charge."

Tempers flared after Borini caught Cook with a lunging challenge as the Black Cats fought, ultimately in vain, for a breakthrough in a game they simply had to win.

Players from both sides reacted and referee Stuart Attwell and his assistants took some time to restore order before Borini and Bournemouth midfielder Harry Arter were booked in the aftermath.

The visitors eventually won the game 1-0 through Josh King's 88th-minute strike, which condemned the hosts to relegation with four games still to play.