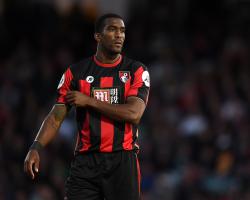 The defender played for City for five years from 2002 but, despite possessing fond memories of his time there, he said he has no intention of hiding his emotions if he can score for a club he joined five months ago.

Distin has sometimes received a poor reception at City after he chose to leave the club for Portsmouth on a free transfer in 2007, but he has no intention of extending a growing trend of players who refuse to celebrate against their former clubs

"I never understand why you should not celebrate, especially as I don't score many goals," said Distin, 37

"If I score I will go crazy

"If I score I will celebrate

I always did and always will.

My dad always said if they boo you they love you.

"It is a big game for us because we play against a team that will possibly win the title but for us it's just a Premier League game."

Distin will likely continue in central defence for Bournemouth after club captain Tommy Elphick was ruled out for eight weeks following surgery on an ankle injury.

City are without the injured Sergio Aguero and David Silva, perhaps the two finest players in their exceptional squad, but Distin does not believe that their collective absence makes Bournemouth's visit to the Etihad any easier.

"You can look at it thinking it will be easier but the truth is it won't," he said.

"They have a really good bench and no matter what it will be a tough game.

"If we start believing without those two it will be a comfortable afternoon we will be wrong."