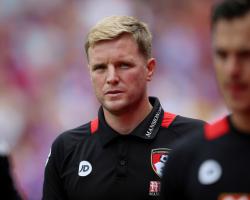 Pulis will be in the opposition dugout on Saturday when Howe's Cherries face West Brom at Dean Court, with Bournemouth looking for their first Premier League win of the season

Howe was part of the Bournemouth youth squad when Pulis stepped up from being a player to manager at the club in 1992.

Now he admits the advice he received at a young age from Pulis stayed with him through his career.

Howe said: "He took me for a few sessions, I think when I was about 13, 14 years old, so he certainly had an impact on my football, without a doubt.

"I think it was more based towards fitness really and making sure I improved my fitness levels.

"His training sessions, even as a young guy, there was a fitness element then and I was surprised at the demands that were being put on me at that age.

If you are not fit you cannot play so I have a huge respect for him."

Howe added: "He was so involved with the football club then as manager of Bournemouth in all aspects.

"He was at the centre of excellence, he was at youth-team games, he was taking the first team, he was almost everywhere and you can feel his presence around the club."

Pulis is poised to reach 1,000 games as a manager this season, with Gillingham, Stoke and Crystal Palace among his former clubs, and Howe is not surprised he has been so successful.

He said: "We have had a long association, we have known each other a long time and I have nothing but huge respect for him.

"He is a really good football man, he lives and breathes football

I think it is his biggest passion, you can see that when you speak to him and I owe him a great deal

My early career, a lot of that was down to him.

"He has always found a way to survive and at this level with the clubs he has managed, that is a huge achievement."

Bournemouth were unbeaten against West Brom last season, beating them 2-1 at the Hawthorns in December and sharing the points at Dean Court towards the end of the season.

Both sides had been guaranteed safety when the teams played on the south coast but Howe believes there is still a lot to take from the game into this weekend's clash.

He said: "It was a totally different kind of game

Both teams were safe, it had a different feel about it

Both teams were desperate to win and I think the mistake we made was we let them score first.

"That's the thing with West Brom: if you let them get their leg up, they are a very good side at defending and they are very good at closing games out.

"Thankfully we came back and got a point

We need to learn lessons from that."