Wengers style of football an inspiration for Bournemouth boss Howe 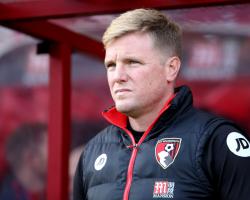 The Cherries head to the Emirates Stadium boosted by last weekend's 1-0 win at Stoke, which left them in 10th place having ended a two-match losing streak.

Arsenal, meanwhile, played out a third successive draw when held 2-2 by Paris St Germain in their midweek Champions League tie.

Wenger's side headed into the weekend fourth in the Premier League, but only three points behind leaders Chelsea.

Howe knows just what to expect when his side line up on Sunday afternoon, albeit without on-loan midfielder Jack Wilshere, who is not eligible to face his parent club.

"I have been a big fan of their style of football for a number of years in terms of how they play and how loyal they are to their philosophy - win lose or draw, they will continue to do the same things, but do them better," Howe said at a press conference.

"The integrity of the club and the manager, how he conducts himself, I am a big fan of the club in a number of ways.

"Since becoming a manager I do the same thing

You watch the top teams and look at how you can get your team closer to that, so Arsenal, along with a number of other clubs, have had a big influence on my football ideas

"I would say there are slight similarities between how we play and how they play, but I would not say we are identical

There are differences in players and ideas, but we are following the same paths, I think."

Howe may only be at the start of his coaching career, but the 38-year-old has found himself touted as a potential successor to Wenger one day

For now, though, Howe's only focus is on leaving north London with a positive result on Sunday.

"B eing linked with other jobs is always nice, it means we are getting results with people liking how we play, but moving is not a consideration or thought of mine at all," he said

Despite not being able to call on Wilshere, Howe will have defender Adam Smith available again following suspension

It leaves the Cherries boss with a welcome question of whether to change a winning side, given on-loan Chelsea defender Nathan Ake scored at Stoke in what was a rare start

Howe said: "The selection issues are a chance to give someone the opportunity and hope they take it, it proves the reinforced strength of the squad and it is nice to be in that position."