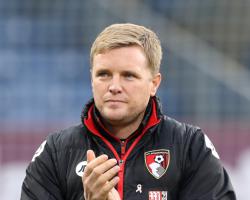 Rodriguez at the double as Saints hit back to beat Bournemouth

Jay Rodriguez's brace fired Southampton to their first away victory in the Premier League since September in a convincing 3-1 win at Bournemouth.

Rodriguez rejected a loan move when boss Claude Puel joined Saints in the summer, and finally looks to be over the serious knee and foot injuries that have dogged his last two years.

A first league win on the road in six matches had Saints manager Puel feeling vindicated for leaving Jose Fonte on the bench.

Unsettled Portugal defender Fonte was seen deep in animated conversation with Saints manager Puel on the Dean Court turf shortly before the teams were announced.

Fonte has previously voiced his displeasure with Puel's rotation policy that has denied the 32-year-old any Europa League action - and also kept him out of the fray at Dean Court.

Saints' refusal to extend Euro 2016 winner Fonte's contract beyond its remaining 18 months has put a host of suitors on alert ahead of the January transfer window.

Apparent public disagreements like the pre-match discussions between Fonte and Puel here will only further stoke the fires around a mid-season transfer for the highly-regarded centre back.

Southampton's win will doubtless have left the club's French manager confident he made the right call in sticking to his rotation guns.

And, once Rodriguez found his range, Bournemouth had precious few answers.

Wilshere's pinpoint cross challenged Ake to pull out all the stops with his aerial challenge, and the versatile defender duly delivered.

Joshua King should have doubled the Cherries' lead when Adam Smith robbed Sofiane Boufal, but the ex-Blackburn forward wasted the hard-won opening.

The England full-back cut inside Adam Smith, then outside Simon Francis before prodding across and past Artur Boruc.

Bournemouth's unusually errant passing stemmed any further openings for the remainder of a half and Saints were more than happy to turn around level at 1-1.

Puel's men wasted no time in stealing the lead after the break either, substitute Davis' one-two with Boufal splitting the home defence.

The lead emboldened Saints still further, with Boruc forced to bat away Rodriguez's close-range effort and Ake clearing off the line from Hojbjerg.

And when Rodriguez thumped home the third with a 20-yard volley, Southampton's victory was complete.